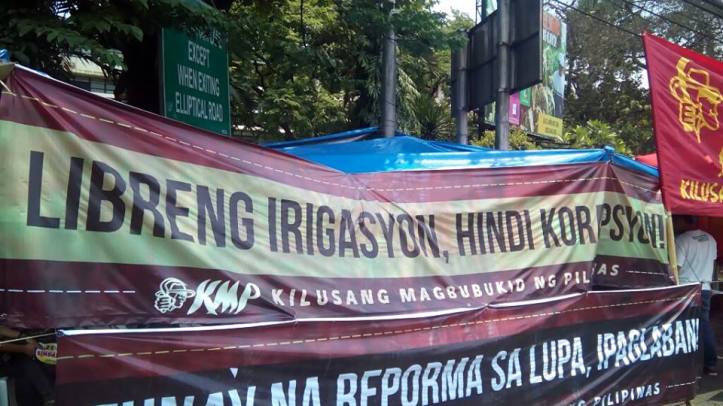 The Kilusang Magbubukid ng Pilipinas said the Department of Agriculture (DA) and the National Irrigation Administration (NIA) should work ‘triple time and triple hard’ in implementing Republic Act 10969 or the Free Irrigation Services Act that President Rodrigo Duterte has finally signed due to the insistence of farmers nationwide.

The Free Irrigation Services Act grants free irrigation to farmers owning not more than eight hectares of land and condones unpaid irrigation fees by farmers who till the same size of property.

In the Lower House, Anakpawis Partylist Rep. Ariel Casilao is among the principal authors of the Free Irrigation Services Act and staunchly supported by MAKABAYAN bloc legislators who were among those who rallied the legislation to its passage.

“The enactment of the free irrigation law is a victory of a long-fought struggle of farmers nationwide. Now we enter the next phase of the battle -– to ensure the implementation of the law so that farmers and irrigators associations could really benefit from it,” says KMP chairperson Danilo Ramos.

“We expect to hear from DA secretary Manny Pinol, NIA administrator Ricardo Visaya and Cabinet Secretary Jun Evasco on how free irrigation services would be implemented. The last time we checked, NIA was still collecting operation and maintenance fee from farmers.”

“Farmers will be vigilant and active in pursuing the implementation of the Free Irrigation Services Act. The DA and NIA should issue the Implementing Rules and Regulations of the new law,” said Ramos, adding that even before the law was enacted, the NIA was allocated an additional budget of almost Php4 billion for the implementation of free irrigation in 2017 but continued to collect irrigation service fees from farmers.

“At this crucial period when farmers and the Filipino people are attacked from all fronts – the economic and political fronts, we are determined to further campaign for economic gains and improvement of our livelihood,” the peasant leader said.

The KMP will continue to campaign for free land distribution, the junking of the burdensome TRAIN law that resulted to immediate, exorbitant increase in the prices of petroleum products, rice, commodities and services.